e
Following in the Oscar-winning tradition of this clip, I encourage all Yankee fans to get up out of your BarcaLoungers, stick your heads out the window and shout to Jeter, A-Rod, Cano and anybody else who left one of tonight’s 15 runners in scoring position: “I’m mad as hell and I’m not going to take it anymore!”
Yes, the Red Sox have commandeered sole possession of first place, and Wang probably made his last start in pinstripes before getting shipped off to an undisclosed location.

But this was a game the Yankees could/should have won. The relief corps of Hughes, Coke, Aceves did an admirable job. Swisher made a great diving catch after failing to make a routine one earlier. And Damon and Posada continued to hit for power. 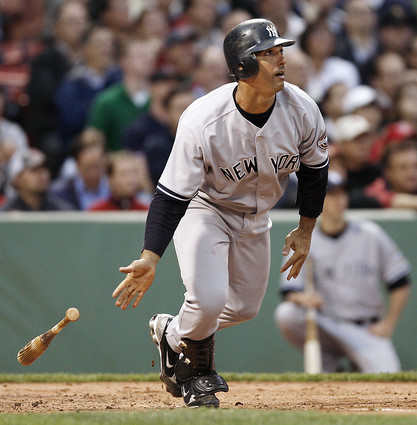 But it was Tex’s night to shine. Win or lose, the guy can flat out hit. I know it’s only June, but I’m thinking MVP.

There were moments during the eventual 6-5 loss when I really thought we’d be celebrating a comeback. I was watching the ESPN feed (it was that or NESN here in California), and Rick Sutcliffe, who is always mind-numbingly boring, said when Wakefield was replaced by Ramirez: “It’s the bullpen that separates the Red Sox from the Yankees. This game is over.” Not quite, Sut.
Damon: homer.
Tex: homer.
Result: Yanks pull within a run.
Of course, he also came up with this gem in the second after Swisher bungled Kottaras’s ball: “Makes you appreciate all those years that Trot Nixon played right field here.”
Trot Nixon?

I know Red Sox fans will always have a place in their hearts for the Trotster and he used to kill the Yankees with the bat, but he wasn’t exactly a Gold Glover, was he?
Anyhow, the comeback didn’t materialize (why have Gardner pinch run if he doesn’t steal?). Instead, we Yankee fans suffered through another exercise in futility against Boston, and it’s downright freakish.

I’m mad as hell, yes. But mostly I’m worried. Not about the Yankees. They were on a nice roll before they hit Beantown and they’ll probably resume their winning ways as soon as they leave. My concern is for Wang. What happened to him, and why can’t somebody fix him?