My family lives back east, so my husband and I drive down to L.A. every Thanksgiving and celebrate at the home of our friend Rhonda Friedman. Rhonda not only takes in strays like us but prepares a fabulous meal and sets a very elegant, tasteful table – flowers, crystal, candles, the works.

Rhonda is the supervising producer of the soap opera daytime drama, “The Bold and the Beautiful.” She is frequently seen walking the red carpet at Emmy Awards and such. 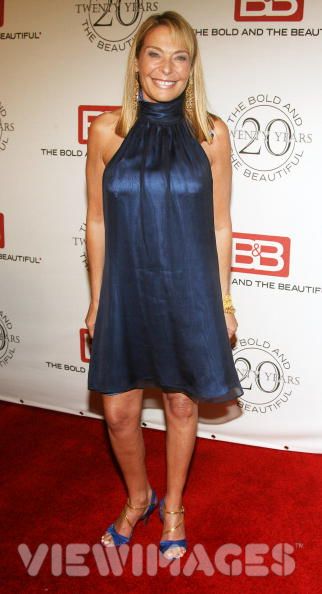 Rhonda always presides over a really nice group of people, but occasionally, as on “The Bold and the Beautiful,” there is drama.
This year, along with her family members, we were joined by her friend Jennifer Farrell, who until recently hosted the TV show “Find & Design,” which was like “Extreme Home Makeover” without the “Extreme.”

Jennifer’s boyfriend Mike was there too. He produces/directs a reality series called “My Big Redneck Wedding” on Country Music TV. I had never heard of it, so I made him say the name of it about six times. Apparently, it is hosted by this man.

Also in attendance was Rhonda’s friend Mary Ann, the ex-wife of actor John Saxon. Does anyone remember him from the movies or the zillion TV series he was on?

So there I was, sipping champagne, eating turkey and minding my own business, when Jennifer’s mom, who was visiting from Florida, said very animatedly, “Jane’s got a book coming out about how she loves the Yankees! I went to my Books-a-Million in Gainesville to buy it, but they don’t have it in stock yet!”
I smiled, eternally grateful that I would have at least one sale, and said, “It doesn’t come out until February 3rd. Maybe you could go back to the store then.”
I resumed eating, this time diving into the stuffing.
“The Yankees are losers,” said somebody down at the other end of the table. It might have been Rob, Rhonda’s brother. Their family is from Chicago and they’re Cubs fans. Or it might have been Mike, Jennifer’s boyfriend, who also roots for the Cubs.
“They had a down year, yes,” I admitted, feeling my blood pressure spike.
“A down year?” said Antonio, the dashingly handsome son of Mary Ann and John Saxon. “They sucked.”
I laughed. Well, it was Thanksgiving. You’re supposed to laugh and be jolly and forgiving.
“Yeah,” Mary Ann chimed in. “What do you think went wrong with them, Jane? Besides the pitching and hitting and fielding.”
O.K. That was downright sarcastic! Never mind that she and her son are Dodgers fans. No excuse for picking on my team during a lovely holiday meal.
I set down my fork and eyed her. “We had a new manager,” I said. “And there were injuries. A lot of injuries.”
“Plus, they sucked,” said Antonio.
Everybody at the table laughed. LAUGHED. Including my husband, a Yankee fan, or so I thought. Would no one but me defend the Pinstriped Ones?
“We’ll bounce back and be very competitive next season,” I said, my heart thumping now. I was trying to keep it civil. I was.
Antonio smirked. “How? You can’t even sign Sabathia.”
Uh-oh. I gripped my champagne glass tightly and said through clenched teeth, “Then we’ll sign one of the other free agents. Lowe, maybe.”
“Lowe?” he said mockingly. “You can have him. He’s garbage.”
“Face it, Jane. The Yankees aren’t what they used to be,” said Mary Ann.
That did it. How dare she? How dare any of them?
I should have attempted to calm myself, done some deep breathing, shoved more food in my mouth. Instead – I’m so embarrassed to tell you this – I threw my champagne at Mary Ann. In turn, she grabbed a handful of candied yams and threw them at me. 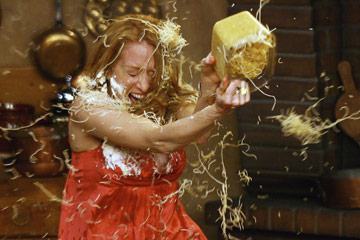 In the blink of an eye, she and I were really going at it.

Needless to say, Rhonda’s beautiful table was ruined. My apologies to her. I can only hope and pray she’ll overlook my boorishness and invite me back next year.
In the meantime, I’ve sent her this video just to show her how bad things could have gotten.