Nothing. Still nothing. Maybe Cliffy and Kristen spent Sunday in church praying for guidance. “Should we go to New York?” they asked the Lord. “Or stay in Texas? Or choose the Mysterious Team Nobody Will Name?” If I were the Lord, I would whisper, “The Yankees. Always the Yankees.” But I’m just a she-fan, so I’ll wait another day like everybody else. I predict Lee will announce his decision tomorrow and I’ll be asleep here on the west coast. Somebody call me if there’s good news, OK?
No Countdown video of Cliffy tonight. Instead, I’m posting the trailer for today’s screening, which was “The Fighter,” the new Mark Walburg movie set in Lowell, MA that tells the mostly true story of welterweight Micky Ward. I love boxing movies for some reason, and this one didn’t disappoint. Amazing performance by a jittery, funny, hollowed out Christian Bale as Micky’s crack-addict half-brother Dicky. I know I keep saying stuff like this, but Bale will win the best supporting actor Oscar or I’ll eat one of my Yankees T-shirts. Take a look.
I thought our screening group was getting Bale, along with director David O. Russell, for the Q&A after the film, but Amy Adams, who is fantastic as Micky’s girlfriend, came instead (by helicopter from LA, as it turned out.) 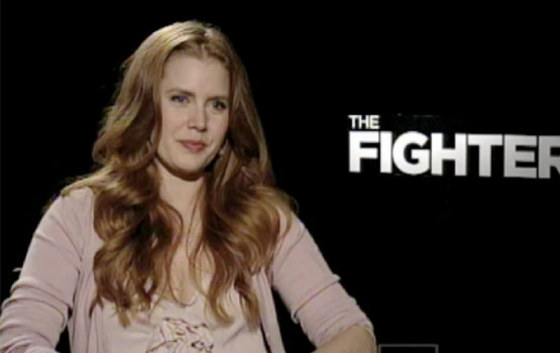 She was adorable and interesting and answered all our questions with patience and humor. And yes, of course I raised my hand and asked a question. (It was about Sugar Ray Leonard and you have to see the movie to understand how he figures into the story). Today’s screening was the last one until March, because the Santa Barbara Film Festival will take over the town for two weeks in January/February. Very excited about that, as it’s a great event every year. Meanwhile, I hope tomorrow brings us closure in the “Cliff Lee Matter,” as I’ve taken to calling it. I would just really hate it if the announcement becomes a media circus in the tradition of LeBron’s “The Decision.” Let him simply have his agent alert reporters, schedule the press conference with whichever team he picks and be done with this.