Remember Mickey Rourke, the actor in ’80s movies like “Diner,” “Rumble Fish” and “The Pope of Greenwich Village?” He was always the gritty, tough guy and used to look like this.

Then came a lot of bad movies, an arrest for spousal abuse and a DUI. I wouldn’t be much of a blogger if I didn’t post a mug shot or two.

Mickey left acting, tried his luck at boxing and essentially fell off the planet – until now. He’s back with a vengeance, starring in “The Wrestler,” which opens in limited release on December 17th. I went to a screening today and all I can say is: Go see this movie! It’s R-rated and not for the squeamish (I hid my eyes during the really gory parts), but it’s amazing.
Mickey plays Randy “The Ram” Robinson, a washed-up pro wrestler who tries to get his life together, even as he can’t give up the thrill of the show. Check out The Ram’s hair. 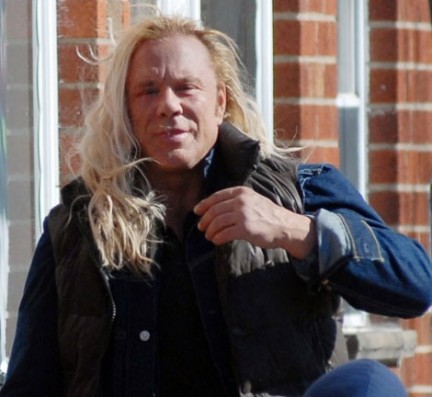 Marisa Tomei is great as the stripper with the heart of gold (lots of pole dancing, guys), and Evan Rachel Wood is very touching as The Ram’s estranged daughter. I can’t recommend the movie highly enough, but beware: It’s not “Rocky” and you won’t leave the theater feeling uplifted. You may leave humming the theme song though. Bruce Springsteen wrote the music that plays over the closing credits.
After the screening, there was a reception for the director and the cast members. I talked to Marisa Tomei, who was very chatty.

No, I didn’t ask her if she was a Yankee fan. I was more interested in how she could dance around naked in front of a zillion cameramen. She told me she downed a few shots of tequila before they shot the scene. Not a bad plan, I guess.
I also talked to 21-year-old Evan Rachel Wood, who is rumored to be dating 52-year-old Mickey Rourke following her breakup with Marilyn Manson. Seriously. Who dates Marilyn Manson? Who dates Mickey Rourke?

Yep, that’s what Mickey looked like at the party today – sunglasses, jewelry, lots of “repair work” on his face. I asked him if he did all his own stunts for the movie and he said he did, winding up in the hospital a few times. He also had to gain 35 pounds of muscle for the role. He claimed he did it by working out at the gym, but there’s a scene where he injects steroids right into his gluteous maximus. Maybe The Giambino taught him how to do it.

Today’s screening was part of the lead-up to the Santa Barbara Film Festival at the end of next month. I volunteered to participate in the trailer that will be shown before each film during the festival. I was asked to name my favorite movie genre, favorite movie in that genre and favorite line from the movie. My answers? No surprise. Favorite genre? Baseball movies. Favorite baseball movie? “Pride of the Yankees.” Favorite line from the movie? Lou Gehrig’s “luckiest man” speech, naturally.
Here I am on the set trying to deliver the line. I was nervous and kept screwing it up. If only I’d had a couple of shots of tequila. 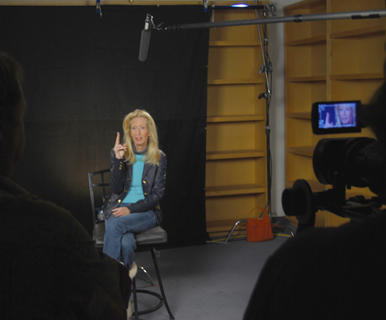 Here’s the trailer for “The Wrestler.” Check it out.