Yes, I know. We’re all getting tired of this Countdown. But it seems that Cliffy is “weighing all the complex offers” that have come his way, poor guy. Despite the stories about Amber Sabathia telling Kristen Lee she has their house all picked out down the street, Cliffy is, as of this moment, still undecided about where to play for the next zillion years. So I’m taking a different tack with tonight’s Countdown video, which doesn’t feature Lee or his agent but rather a Yankee fan – a Yankee she-fan, to be more specific. I hope he and his wife watch the video and realize that money is nice and Texas’s no-state-income-tax law is sweet, but little girls who know the names of every Yankee? Priceless.
As everyone knows by now, Brian Cashman flew down to Arkansas for a visit with Cliff Lee and his wife Kristen. Presumably, his goal was to express the Yankees’ keen interest in signing Lee as well as answer any questions the couple might have about life in New York – and, of course, to allay Mrs. L’s fears about boorish Yankee fans. But how did the meeting go? Nobody’s coming out with details, so I decided I needed to flesh things out for myself. Here’s how I think it went down today…
* Cashman drove up to Mr. and Mrs. Lee’s big new house, rang the doorbell and was greeted by the entire Lee clan, Southern hospitality being what it is.

* He arrived bearing gifts – some toys for the kids with a slight subliminal message. 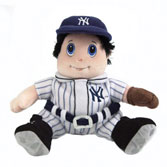 * Mrs. Lee sent the children off to play with their presents and invited Cash to sit down for lunch. She had decided to use her favorite caterer.

* Despite the fact that Cash watches his diet and almost never eats fried foods (especially chicken skin), he threw back a few legs and thighs while he described the joys of playing for the New York Yankees. He talked about the franchise’s history and tradition. He ticked off the names of all its legendary stars. He made a speech about how Yankee fans were the best ever, but he was interrupted by Mrs. Lee and the conversation detoured.
Kristen: “They spit at me and threw beer and shouted mean things. It hurt my heart.”
Cash: “I’m so sorry about that. But there are always a few bad apples at every ballpark.”
Cliff: “Mr. Cashman is right, honey. You know what happens when guys get all liquored up.”
Kristen: “They pass out, that’s what. These people didn’t pass out.”
Cash: “I can guarantee you, Kristen, that the same scenario would never happen if your husband came to pitch for us. You’d be treated like royalty.”
Kristen: “I don’t know about that. I talked to Karen Burnett the other day and she said the fans boo her whenever A.J. has a bad game.”
Cash (laughs): “Your husband will never have a bad game, so no worries.”
Cliff: “Nice of you to say, Mr. Cashman.”
Cash: “Brian.”
Cliff: “Brian. But sometimes it’s just not my day and I stink up the joint. What then?”
Cash: “Cliff, the fans will love you. I’m so certain of it that I’ll put a ‘boo clause’ in your contract. You’ll get an additional $50,000 for every game involving fans booing you or your wife. Fair?”
Cliff: “Extremely.” (Turns to his wife) “What do you say, honey?”
Kristen: “Very fair. But Brian, I have to be sure we’ll be happy with the Yankees. You understand.”
Cash: “I do. And I promise you that if you join the Yankee family you’ll never regret it. Look at me. I’ve been in the organization since I was a kid. The Steinbrenners are the best owners in baseball.”
Kristen: “Nolan Ryan said he was the best owner. He was here yesterday.”
Cash: “Did he make an offer?”
Cliff: “No. We just went hunting. Do you hunt, Brian?”
Cash (panicking): “Um, I play tennis. There isn’t much hunting in Connecticut, although we do have a lot of deer.”
Kristen: “Nolan said we should stay in Texas.”
Cash: “We’ve got better shopping up in New York. Ask Leigh Teixeira.”
Kristen: “I’ve never met her but Amber Sabathia says she’s super sweet.”
Cash: “They’ll take you to Saks and Neiman’s and Bloomie’s. You ladies will have a blast together.”
Kristen (bolting up from the table): “Designer shoes and dresses and everything! I want Cliffy to be a Yankee! Where do we sign?”

And that was that. Mission accomplished. I think.

Is there anyone (besides Rangers fans and probably most of the Dodgers’ fan base) who didn’t find things to like about the 2010 Giants? They played like champions and became champions, just the way it should be. They made me enjoy this World Series, despite the lack of guys wearing pinstripes. Their pitching was spectacular. Their defense was strong. They had the perfect mix of rookies and veterans. (Why didn’t we pick up Aubrey Huff?) And would anyone have predicted that they’d outhit Texas? Just a great, great job in winning it all tonight. A special congrats to my brother-in-law Mark, who has rooted for his Giants for a very long time.

(Sorry about the postage stamp, Mark, but it’s all I could find. You need more pix on your Facebook page.)
What to say about Cliff Lee? For most of the game it looked like he and Lincecum would continue to put zeroes on the board. I kept wondering which team would blink first. But Lee was vulnerable yet again. Maybe his price will plummet?

And, finally, I guess I have to comment on the unfortunate person who happens to be the Rangers’ CEO. His team was fighting for its life in the World Series today and yet he went on his local ESPN radio station and picked on…. Yankee fans? According to Mr. Greenberg, we’re “violent” and “apathetic” as well as “an embarrassment.” Nice. At some point during the day, MLB scolded him and he apologized to Hal Steinbrenner and Randy Levine, dubbing us “passionate” instead. He’s entitled to his opinion, of course. But I’m sick and tired of being dumped on. It was amusing when Joe West called the Yankees and Red Sox “pathetic and embarrassing” because our games last too long for his taste. And it was startling that Kristen Lee called out Yankee fans for their boorish behavior during the ALCS in the Bronx. But enough now. Leave us and our team alone or you’ll have me to deal with. I’m not violent or apathetic, but I can dole out some choice words if pushed.
I wasn’t at Yankee Stadium for the ALCS. I didn’t hear fans taunting family members of the Texas Rangers. And I certainly don’t know Cliff Lee’s wife Kristen. But according to USA Today via the LoHud blog, the fact that she’s miffed at Yankee fans could play a role in her husband’s decision whether to re-up with the Rangers this winter or wind up in the Bronx, among other possibilities. Here’s the pertinent excerpt:

Perhaps the Rangers’ greatest sales pitch simply was having Kristen sit in the visiting family section at Yankee Stadium during the playoffs. She says there were ugly taunts. Obscenities. Cups of beer thrown. Even fans spitting from the section above.

“The fans did not do good things in my heart,” Kristen says.

“When people are staring at you, and saying horrible things, it’s hard not to take it personal.”

It’s more than likely that Kristen Lee did hear and see some “horrible things.” But was she on hand in Arlington when Rangers fans were chanting “Yankees suck” every six seconds? Did she never watch her husband pitch in opposing ballparks when he was with the Indians, Phillies or Mariners? While there’s no excusing bad behavior, it happens everywhere. I would think that by now the wife of a professional ballplayer as well traveled as Lee would have seen and heard it all, not to mention grown a thicker skin.
If she genuinely wants her husband to stay in Texas because she loves it there, because it’s close to the couple’s home in Arkansas, because it’s the best environment for her family, because the Rangers organization ponies up the biggest contract in the history of baseball, then by all means they should stay in Texas. But if she’s going around ragging on Yankee fans, I’m afraid I’ll have to take it personal. I just will.