Tonight’s game against the Indians felt like a replay of every other game featuring a rookie starter for the opposition. Taking nothing away from Josh Tomlin, the Yankees are incapable of hitting pitchers they’ve never faced. They stand there at the plate looking absolutely clueless. 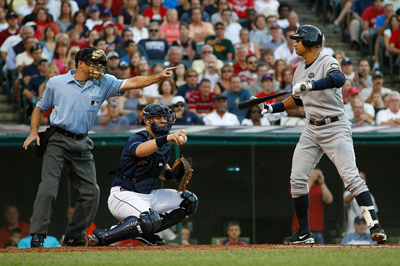 Why is that? They can watch videotape beforehand. They can make adjustments each time through the order. They can use their experience to figure it out. So why don’t they? Boggles my mind.

CC wasn’t his usual dominant self, but his defense definitely let him down. Ugh. There’s nothing positive to say about tonight’s loss except that Chan Ho Park didn’t give up a run. Oh, and Brett Gardner made a great throw home. That’s about it.
After the Yankees were done, I switched over to Angels-Red Sox, curious to see how Lackey would be greeted by the fans in Anaheim. I’d heard he was hopeful that they’d give him a warm reception, seeing as he spent his entire career there before going to Boston. Here’s what happened: people booed him. A lot. And there were signs like this:
“LACKey of Loyalty”
and
“Traitor John.”
I can’t stand Lackey, but I felt sorry for him. I guess I should have remembered the way they always boo Tex when the Yankees play the Angels. Do their fans not realize that management decided not to retain the services of Lackey and Tex, not the other way around? Sure, the players became free agents, but that’s baseball. Why not applaud your former heroes for the great work they did when they helped you win ball games? Easy for me to say, you’re thinking. I haven’t lost Jeter or Mo to free agency. But even if I did, I’d like to think I’d always cheer for them. When Pettite went to play for the Astros I didn’t boo him or call him a traitor. I don’t get the sense of betrayal, I really don’t. Someone needs to explain it to me.