The Yankees blog “Was Watching” posted about the supposed tension between A-Rod and Teixeira when both were with the Rangers. Maybe there was a rift back then, but Tex said during his press conference that A-Rod was one of the players who got in touch to congratulate him on becoming a Yankee.

There’s a long history of teammates not getting along, even hating each other. But in most cases, the strained relationships didn’t affect the success of the ball club.
For instance….

Babe and Lou, despite mugging for the camera together, were said to be polar opposites who felt genuine enmity toward each other. Did it hurt the Yankees? Nope.
Neither did the resentment between Thurman 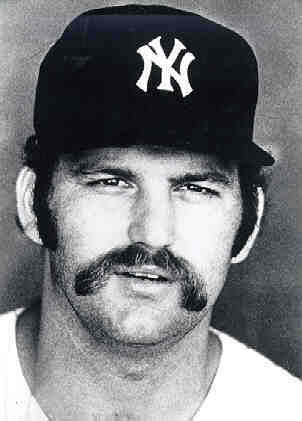 but the Yankees more than managed.
Turning to other teams, the Dodgers did just fine in spite of bad feelings between Don Sutton 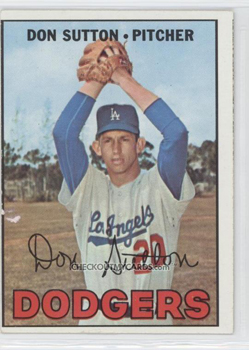 wasn’t thrilled about sharing the spotlight with Tony Conigliaro.

When Torii Hunter was with the Twins, he threw a punch at Justin Morneau 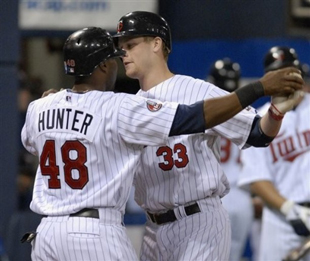 but they kissed and made up.
Even last year’s Cinderella, the Rays, had two players who got in each other’s faces. 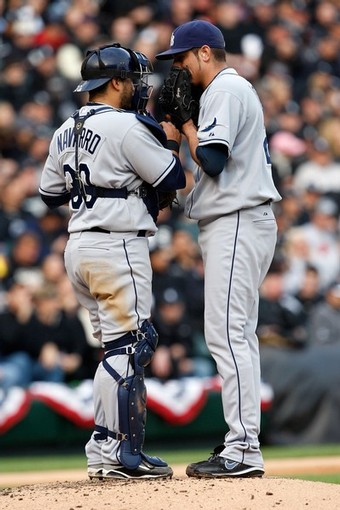 But Garza and Navarro patched things up and won the Al pennant.
Baseball teams are like families – there’s a good chance someone won’t get along with someone else. But the teams that push through to the playoffs find a way to make even negative chemistry work.
It all comes down to being able to put aside petty differences, recognize the greater good, and go like this….

What a ridiculous ninth inning if you’re the Rays. For six-plus innings your offense is stymied by geezer Jamie Moyer, who shows his age by sticking his tongue out at you.

Then you get back into the game when your very own cartoon character, B.J. Upton, steals two bases and ties the score.

All the momentum is on your side going into the bottom of the ninth, and yet what do you do? You sit there stunned as

Howell hits someone named Eric Bruntlett. Then you hide your eyes as

Balfour hurls a wild pitch and

Then Maddon says, “Walk the bases loaded with nobody out”

so that the Phillies catcher Carlos Ruiz can hit a squibber to third that Longoria spazzes out on, scoring Bruntlett and leading to this. 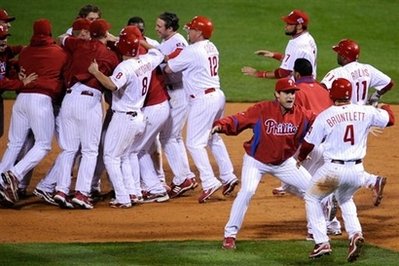 Yes, you lost a tough one in Philly, Cinderella boys. Let’s see if you can pull yourselves together tomorrow night. Sleep well.

Today’s makeup game against the Tigers was sort of pitiful, given that Verlander went from being a number one starter for Detroit to basically serving up batting practice. But still. The Yankees won after nearly blowing it. The “W” won’t mean anything in the long run, given that the Red Sox won too and there are only 25 games to play and all the rest. But it was fun watching the Yanks hang on after yet another bonehead play by Cano combined with yet another awful start by Ponson.

I would love to crawl inside Brian Cashman’s head and find out what he’s thinking as he goes along on this road trip. Did he really believe he would “catch lightning in a bottle” (hate that expression) with Sir Sidney? If he had no intention of bringing Melky up today when the rosters expanded, why did he wait so long to send him down to Scranton in the first place? And is this road trip a scouting mission or a show of support? If I were in his head I’d be looking long and hard at the Rays over the next few days. I’d try to figure out how the Yankees let Carlos Pena and Dioner Navarro go. I’d be noting how athletic the Rays are, on the base paths and in the field. And I’d be wondering why their young pitchers have so much better stuff than ours. When I wrote that I was impressed with the Rays in that New York Times article last year (see my first post), people laughed at me. They’re not laughing any more.