Since the players seemed very well protected from the sting of champagne tonight, I figured I’d follow suit and don my rain slicker, shower cap and goggles. Why suffer? 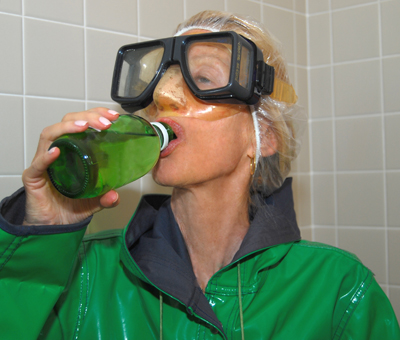 Despite their sputtering en route to the playoffs, the Yankees showed why they’re the reigning World Champs, sweeping away a good-but-not-good-enough Twins team. I was so proud of them. But special mention has to go to Huuuuuughes, who stepped onto the mound and delivered a spectacular performance. It’s very heartening to see a young player reward a team’s faith in him that way. There was a time when I would have considered shipping him off to get a Santana or Halladay, but clearly I was a fool. (See above photo for further proof of that.) I also doubted that Marcus Thames would make a contribution earlier in the season, and he, too, proved me wrong. (I would make a really lousy G.M.) Anyhow, what I loved about this entire series was that our “core four” guys were as superb as ever and the newer guys did a great job too. Joe managed each game as if we were talking about Game 7 of the World Series, and while I winced every time he called for Mo, I can’t argue with wanting to get this round won and done – the first time the Yanks have moved into round two as the wild card team. I’m just glad I made it home from my friend’s daughter’s wedding this afternoon in time for the first pitch. The cake was pretty, wasn’t it? You can’t see the inside, but the center layer was chocolate heaven. 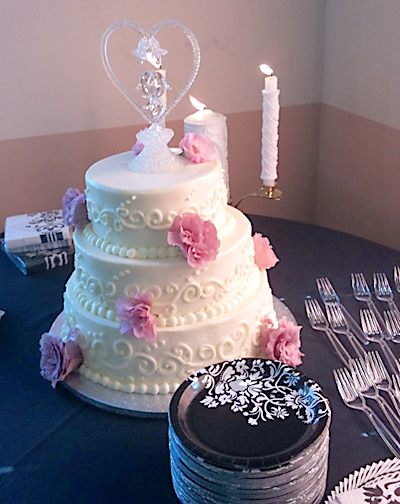 On the subject of cake, I’ll announce a cake-related contest in Monday’s post and will simply say now that one lucky winner will be eating sweet. In the meantime, most of you have “met” my mother from all the She-Fan Cam videos I’ve done with her. Now, you’ll find out how she became a Yankee fan. A piece I wrote about her is running in Sunday’s New York Times sports section (it’s on their web site tonight). Enjoy.

Twice Widowed and Now Smitten With Men in Pinstripes

Baseball is full of heartwarming “Field of Dreams”-y stories about fathers and sons playing catch in the backyard, going to their first ballgame together and building a closer relationship over hot dogs.

Keep up with the latest news on The Times’s baseball blog.

Go to the Bats Blog

My mother, on the other hand, wasn’t big on playing catch (“It’ll
ruin my manicure”), didn’t take me to a single ballgame (“Go with your nice friends, dear”) or eat hot dogs (“God only knows what’s really in them”).

In those days, she wasn’t a fan of theYankees or any other team. Widowed, newly remarried and the mother of six, she was focused on raising our blended family in Scarsdale, N.Y., and commuting into Manhattan to teach Greek and Latin at Hunter College. The only time she ever talked to me about baseball was to scold me for thumbtacking Mickey Mantle posters to my bedroom wall and poking holes in the avocado green paint.

She grew up in the Bronx with a father who adored the Yanks, so she could hardly escape the names Babe Ruth,Lou Gehrig and Joe DiMaggio, but the sport itself held no appeal for her. To wit, she was cleaning out her closet one afternoon during my college vacation and came upon what looked like a yellowed, tattered menu.

“You might as well have this,” she said, handing it to me. “It’s got Babe Ruth’s autograph on it, so maybe it’s worth something.”

I was stunned and said, “How in the world did you get his autograph?”

She shrugged, nonchalant about a bona fide treasure, and said: “He was at the next table when your dad and I were out for dinner. I walked over with the menu and asked him to sign it.”

As I got older, my Yankees fandom became a genuine mania, and Mom, now widowed for the second time, would stare at me as I’d watch games and rail at whichever batter left a runner in scoring position, saying, “You’re very entertaining, dear, but why do you raise your blood pressure with this nonsense?”

I decided it was time to explain the basics of baseball to her — just the way so many fathers have explained the sport to their sons. I went through the list of Yankees players on the roster that year and gave them each a back story. I described the difference between a slider and a splitter and pantomimed various pitchers’ windups. And, of course, I ticked off the many, many reasons why Yankees fans hate the Red Sox.

Mom absorbed my lecture, then asked lots of questions, including: “Who decided there should be four balls allowed but only three strikes?” “Does the D.H. get paid less money since all he does is hit?” “Why do the players spit so much?”

I didn’t have all the answers, but I was glad she was interested enough to care. When we had finally exhausted the subject, she nodded and said: “To think I’ve been wasting my evenings watching ‘Law & Order.’ I’ll give baseball a try.” Have I mentioned that she was in her 80s when this conversation occurred?

From then on, she started watching the Yankees every night, settling in with the YES Network, familiarizing herself with the players and coaches, learning the rhythms of the game, staying awake until the final outs. She realized what good company the Yanks were; she was no longer alone or lonely. In other words, she became a fan — late in life, yes, but no less hard core.

She developed an attachment to Bernie Williams and was bereft when he wasn’t re-signed. She regarded Melky Cabrera as her wayward son and called him “my Melky.” She became positively giddy whenever Mariano Rivera trotted in from the bullpen to “Enter Sandman,” although I’m sure she thought Metallica was a type of jewelry sold on QVC.

Now, at 93, she is as addicted to the Yankees as I am. Her memory isn’t what it used to be; she forgets the players’ names or mangles them. Cano can be “Canoe.” Jorge is often “Hor-gay.” And C. C. is — well, she doesn’t remember the Sabathia part unless prompted.

Still, every time I fly in from California for a visit, we eat dinner on tray tables in front of the TV so we can watch the games without missing a pitch. We bond over baseball in a way we never bonded over shopping, cooking or other girly pleasures — a mother and daughter debating the pros and cons of batting Jeter in the leadoff spot.

Here’s the catch. I may have turned Mom on to the team I love, but she ended up being the truer, more steadfast fan. She doesn’t scream at the TV, doesn’t panic when the Yankees are losing, doesn’t second-guess Joe Girardi‘s every move, doesn’t even freak out when Austin Kearns whiffs with the bases loaded. She’s unwavering in her cheering, without all the hysteria I bring to every game.

“How come you never get angry at them?” I asked during my most recent trip east.

“Because they’re the Yankees,” she said with conviction. “They always try to come through and do their best. You of all people should know that, dear.”

As I watched my team compete against the Twins in an American League division series last week, I tried to come through and do my best — to emulate the fandom my very wise mother taught me.

Jane Heller is the author of “Confessions of a She-Fan: The Course of True Love with the New York Yankees.”