I knew tonight would present a conflict.
I was scheduled to be on a writers panel at Borders here in the Santa Barbara area, but I didn’t have to arrive until 7 pm. Since the game started at 4 pm PT, I figured I’d see most of it before I left the house. (I couldn’t very well cancel my appearance; authors never pass up an opportunity to plug their books.) But I was a little panicky prying myself away from the TV with the score at 5-3 and Hughes coming out for Vazquez.
I listened on my phone in the car on the way to the store. Still 5-3.
I continued to listen even after I walked in, was introduced to my fellow panelists, sat down and waited for the Borders events coordinator to clear his throat and begin the program. Phone tucked away in my purse, I spent the next 90 minutes answering questions about the She-Fan book and this blog, as well as focusing on the work of the other writers. And then, when there were no further questions and we were done, an audience member approached me.
“The Yankees won 8-3,” he said with a big smile.
I was taken aback at first. I mean you don’t expect to meet a lot of Yankee fans in California. For example, the panelist who sat next to me was a sportswriter who rooted for the Dodgers, and the panelist next to him was a newspaper editor who rooted for the Giants, and the events coordinator from Borders was an Angels guy.
“Thanks for telling me,” I said. “So you’re a fan too?”
He was a fan all right. He told me that his house had burned down in the last wildfire and that the possession he was most saddened to lose was the signed copy of the autobiography of Mickey Mantle, his childhood hero. Now that’s bleeding pinstripes.
Meet Jerry.
I had a good time at Borders, but I had an even better time when I got home and watched the rest of the game. Yaaaay, us! I was afraid the Rays would keep chipping their way back, especially with so many of our relievers unavailable. But Cano’s shot past Crawford was huge and Joba held on, and my night had a very happy ending after all.
After the game I watched the profile of CC on HBO’s “Real Sports.”
http://img.widgets.video.s-msn.com/flash/customplayer/1_0/customplayer.swf
What a lovable guy. When he teared up about his father, I teared up too. Of course, I had to laugh when I saw the size of his house at the end of the piece. It’s….large.

Oh, one more thing. Here’s a pic of The Boss’ newly unveiled monument. It was sent to me by Friend of the Blog John (aka ooaooa) and taken by his daughter, who was at tonight’s game. Thanks, John. 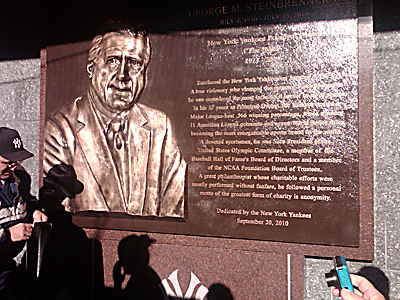 Tonight’s series opener felt like it might be yet another seesaw battle between the two teams, but Curtis Granderson (or Grandis Curtison, as I called him in a moment of excitement) delivered the knockout punch with his second homer of the game. Whatever he and Kevin Long did to his swing worked, and his improved offense couldn’t have come at a better time. With Tex clearly ailing and flailing, Grandy is key to the Yanks’ success. Jeter looked a lot better at the plate too, and Cervelli seemed rejuvenated.

Ivan Nova continued to impress – until he kind of fell apart again. I guess he just runs out of gas. 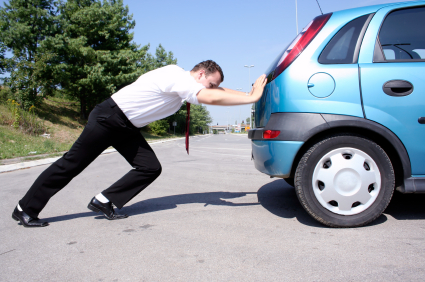 Was I about to stick my hand into the TV and slap Logan and Gaudin when they couldn’t throw strikes? Uh-huh. But it all ended happily, if shakily, after Mo closed it out. As for Garza, maybe he should take Pedro Martinez’s line and call the Yankees his daddy. It was nice not to have to play scoreboard baseball during the game. The Yanks kept the Rays in the rearview mirror for another day. Whew.
And now a few words about the pre-game activities. Am I the only one who got choked up? What a ceremony, as only the Yankees can do ceremonies.

Watching the entire Steinbrenner family come out onto the field, including Mrs. Steinbrenner whom I’d never seen before, was touching, as was the procession of players past and present (Roy White is such a class act) who followed them to Monument Park, and the return of Torre and Mattingly who both got rousing receptions. After The Boss’ monument was unveiled, I was mesmerized by the sight of Mo crouched all by himself staring at it, as if he really was saying goodbye for the last time. Sob!

And how about Steinbrenner’s granddaughter and her rendition of “God Bless America?” I wasn’t expecting much, figuring she got the gig because of nepotism, but she was awesome. Bring her back, please! And speaking of anthems, how spooky was Frank Sinatra, Jr.? He not only sounded like his father but has aged the same way (well, maybe a little more jowly).

Anyhow, I’m sure it was a great night to be in the Bronx. I’m grateful I was able to see it all on TV way out here in the boonies of California. Speaking of which, I’ll be on a writers panel at the local Borders store in Goleta tomorrow night if anyone’s in the ‘hood. Stop by and say hi.
The item on LoHud today about MLB’s initiative in fighting breast cancer (and CC’s participation in it) was excellent timing for a blog post of my own. Why? Because tonight I took part in an author panel to raise money for our local chapter of Planned Parenthood. The panel was called “Love, Laughs & Life As We See It,” and it was held at a gorgeous private house in the hills of Santa Barbara. Not a tough gig at all. Here I am with my fellow authors and our moderator sipping Cosmos. (Yeah, I’m the one who stupidly forgot to take off her shades.)

At the far left is Starshine Roshell. (That’s really her first name; her dad was an actor in the show “Hair” and named her after the song “Good Morning Starshine.”) She writes an extremely popular column for the Santa Barbara Independent and has collected the best of the columns in a new book. She’s also writing a TV pilot for CBS based on her life as a wife, mother and columnist.

Next to her in the pic is Jenna McCarthy. A former “shock jock” on the radio here in town, Jenna writes for tons of national magazines and is the author of hilarious books on marriage and parenting.

At the far right is Kate Schwab, who used to be head of marketing for Borders in SoCal but now has her own literary PR business. She was a terrific moderator, firing all sorts of interesting questions at us about the craft of writing.
We also took questions from the guests, who had paid actual money to come and hear us speak. One of them approached me as the evening was winding down and said, “It’s such a pleasure to meet another female baseball fan.”
I smiled. “So you love baseball too?”
“Since I was a little girl,” she said. “My friends think I’m really strange to love baseball – it’s slow and boring to them – but I’d rather watch the Dodgers than do almost anything else.”
So…even at a fundraiser…on an off day for the Yankees…when I least expected to be talking about baseball…there was another she-fan. Perfect.
P.S. Here’s the nightly reminder about the Cooperstown Cookie Contest. Last chance to enter is April 11th at the stroke of midnight!

No baseball blogging tonight as I was busy in my other capacity as a writer and writing teacher. As some of you know, I co-lead a workshop with my friend Melodie Johnson Howe called The Muse Madams (check out our web site), and tonight was a free session we gave at the Borders store in Goleta, just north of Santa Barbara. With all the rain we’ve been having in California, I didn’t know if we’d get a single person to show up. But we had a nice crowd of aspiring writers who braved the wet weather and brought their work and their enthusiasm. It’s always so rewarding to listen to writers read from their latest projects and then offer our critiques (hopefully constructive ones). And there’s nothing like getting a bunch of writers together in a room. We all share the same concerns and support each other for better or worse. What I’m saying is that my night off from blogging was a good one.
More about baseball tomorrow.
(Oh, about the picture. I’m the one on the right, in the middle of making a point. Melodie is on the left, waiting for me to shut up so she can speak. Everybody there had a story to tell. I hope they all get published some day.)