No, one good game doesn’t mean he’s cured of his slump, but his swing sure looked healthy on that homer. And speaking of swings, how much does Swisher love hitting at Camden Yards? Is it the ballpark itself? Or does he eat a few pulled pork sandwiches at Boog’s before every game? 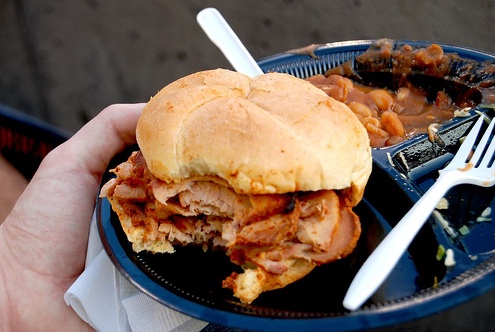 All I know is that I really like him in the #2 spot. He takes pitches, gets on base and drives in runs. So what if he isn’t fast. Granderson is just fine where he is, as was evidenced by his Granderslam (I think that’s what John Sterling called it). Huuuughes wasn’t his strike-out self (how about Stephen Strasburg’s 14 Ks in his debut????), but he pitched out of trouble and didn’t walk anybody and continued his winning ways. On the other hand…

(can you believe these are made of soap?)
…Chad Gaudin causes me to wonder what Cashman was thinking. We had Chad and sent him packing. Then the A’s DFA-ed him and we picked him up again. Why? I get if he’s supposed to come in for blowouts like tonight and eat up innings. 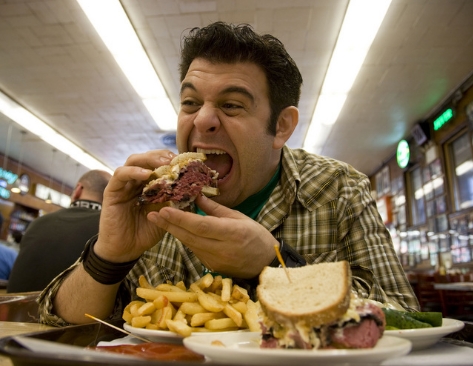 But not if it means giving up four runs, making the game closer than it needs to be and necessitating Mo to even move from his chair. Nuh-uh.

But hey, we won on a night when our division rivals won too. So we kept pace. It’s too early to scoreboard watch for real, but, well, let me amend that. It’s never too early.
I don’t know about anybody else, but I was glad to get out of the Rogers Centre today. Just watching the games on TV made me claustrophobic.

Roof open or closed, the place gives me the creeps. Of course the Yankees’ lack of offense may have had something to do with it. I was afraid that Vazquez’s terrific performance might be wasted, just like Pettitte’s was the day before. But the Yankees actually manufactured a comeback. Who cares if our baserunners were due to walks and hit batsmen. Jeter and Cano came through big time and made a winner of Javy. Girardi got tossed for our entertainment pleasure AND Mo trotted in from the bullpen twice. 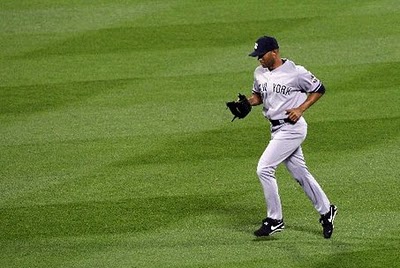 How often does that happen? What wasn’t the least bit humorous was Tex’s continuing struggle at the plate or A-Rod’s sore groin or Nick Swisher getting rung up for a checked swing that didn’t happen. Oh, well. I hope the Yankees enjoy their day off tomorrow. If they have time in Baltimore, they should go here.

I had a great time when my husband and I went there for dinner. They dump your crabs on the table, give you a mallet and let you have at it.

I think Tex, in particular, might enjoy pounding a crab into oblivion. It just might lead to this.

P.S. Anybody watch the fight at Yankee Stadium last night? How cool was Arthur Mercante Jr., the referee who took charge when somebody threw the white flag into the ring and caused all that confusion?

Baseball could use a strong presence like him. Could somebody see if he wants to switch sports?
Not this way…

Or even this way…

Not tonight in Baltimore anyway. What a putrid game for the Yankees, wasn’t it? Especially after Hughes gave yet another gutsy performance? I was working while the game was on, so I had the TV on in the background. Every time the Yanks would do something stupid (walk a batter, hit a batter, make a throwing error, kill a rally), I would turn around to look and then do this. 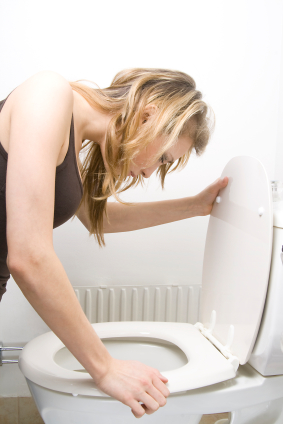 Well, I felt like it. Maybe the players were tired from all their parading around Washington. Or maybe they ate some bad crab cakes in Baltimore. On the other hand, maybe the O’s were just due for a win, poor darlings. All I know is that it was as if the real Yankees had been taken over by little league Yankees.

I also know that we need Chan Ho Park to come off the DL…And for Nick Johnson to stop walking and start hitting…And for A-Rod, Tex and Grandy to be the mashers we know they are…And for Cano to ride this beautiful streak of his until the end of the season when he will surely win the AL Batting Crown.

Things will be better with CC on the mound tomorrow. How do I know that? Because there’s not much for the players to do in Baltimore, so they’ll get a good night’s sleep.

Before I sign off, I’d like to give a shout out to she-fans extraordinaire and friends of this blog, Serena and Lisa, whose own Traveling Baseball Babes is one of my favorite blogs. They’re organizing a terrific fundraising event in Hicksville, LI in June called “Fred K’s Cancer.” Both of their fathers are named Fred and both men are cancer survivors (and big baseball fans), so Serena and Lisa decided to educate people about their diseases in a very special way. They created a Fred K’s Cancer blog, so please check it out and read about their fab event!
I was in my car for part of tonight’s game against the O’s, so I listened to Baltimore’s audio feed on my phone. While I appreciate partisanship in a radio broadcaster (John Sterling defines the term), tonight’s duo would have made anyone wince.

Here’s why.
1) Yes, the Yankees have the highest payroll in baseball. Blah blah blah blah blah. But do you really have to bring it up 7,000 times during a spring training game? And were you serious when you said, “The Yankees will probably go after Albert Pujols because he’s a big name?” Have you not noticed that we have a first baseman named Teixeira?

(And no, I was not amused when he got hit on the elbow and had to leave the game.)
2) There were several (I forget how many) homers hit during the game. But, according to the O’s announcers, the ones the Yankees hit were cheapies that only cleared the fences because of the windy conditions. The shots hit by the O’s, on the other hand, were bona fide, honest-to-goodness dingers.

3) When prospect David Winfree came in for the injured Teixeira, one of the O’s announcers said, “I wonder if he’s related to Oprah?” You think?
Winfree 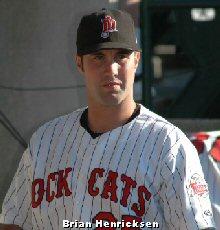 I’m sure Wieters has a very bright future in Baltimore, but I don’t think he’ll be getting his own talk show any time soon.
Oh, well. The truth is I enjoyed listening to the O’s guys tonight. No question they were nonsensical at times, but they had soothing, baseball radio voices – a nice change from the certain-to-be-overheated announcing we’ll be getting on ESPN on Sunday night. The important thing is that Tex’s elbow appears to be all right (the proverbial contusion), and Vazquez pitched well. I’ll take it.

You know how Scott Boras puts together those big fat books promoting his free agent clients – the ones he fills with gaudy stats and then hands them out to GMs? Well, I managed to get my hands on the book about Mark Teixeira. So exciting because I covet the guy for the Yankees almost as much as I covet CC.

But this one is more like a sweet little biography, giving us a glimpse of Mark’s personal side. Nothing at all about his offense. 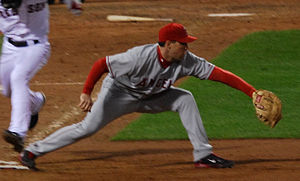 Nothing about the millions he’s worth to some team. This story focuses on the man, the person, the human being behind the hype. Warning: It’s so heartwarming it might make you cry.
It all begins with Mark Charles Teixeira’s birth in Annapolis, MD. The date? April 11th, 1980. 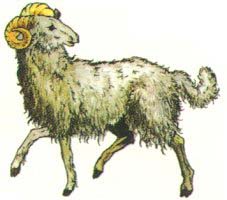 Yes, for those who follow astrology, that means he’s Aries, the Ram – a good thing to be for a ballplayer.
Mark, it turns out, is of Portuguese ancestry, which explains his interesting and hard-to-pronounce last name. Here are some Portuguese people. Can you spot the resemblance?

Neither can I, but maybe he’ll grow into his looks.
His mom, a schoolteacher named Margie, and his aerospace company executive dad, “Tex,” wanted their son to make it in professional baseball so badly that they gave him a bat when he was only a small child. 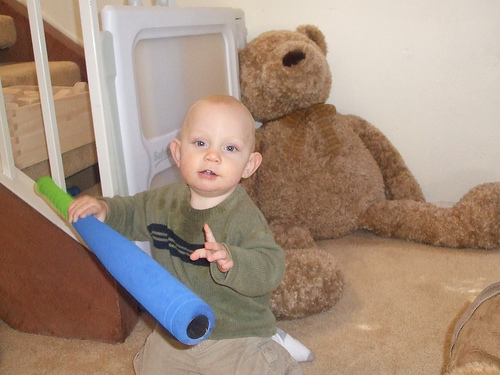 As a teenager, Mark played varsity baseball at Mount Saint Joseph High in Baltimore, a Catholic prep school where he learned how to respect his elders (and future managers).

He went on to play for Georgia Tech, home of the Yellow Jackets.

While it’s understandable that he rooted for the Orioles growing up, the player he totally worshipped was none other than our own Donnie. 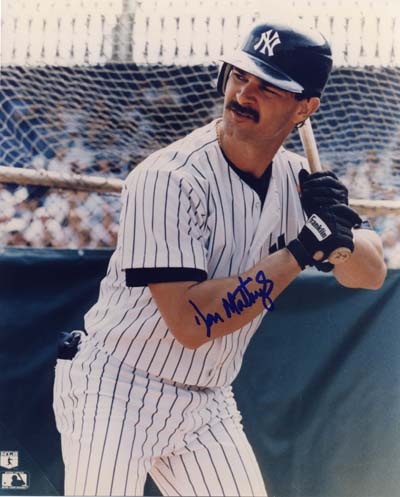 You already know how Mark played for the Rangers, was traded to the Braves in ’07 and landed with the Angels last year. But did you know that he married a woman named Georgia Leigh Williams (cute that her name is the same as his university, isn’t it?) and that they have a son, Jack, and a daughter, Addison? They live in perfect harmony here.

Mark is such a quality person that, early on in his career, he established a charitable foundation to provide scholarships to Dallas/Forth Worth students. 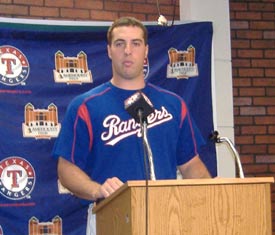 When he’s not playing baseball and spending time with his family, Mark enjoys his two favorite hobbies.

Golf, of course. And hunting.

The book doesn’t say whether Mark kills deer or ducks or pheasants, but the main thing is he doesn’t strike me as someone who would stuff his animals and hang them over the fireplace.
Finally, Mark explains in the book that he has always wanted to live in New York and play for the Yankees. He says that he loves the pinstripes and can’t wait to trade his Angels cap for this one.

Oops. I meant this one.