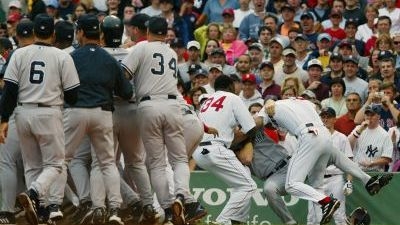 ESPN announced their lineup of Sunday night games the other day, and their second one of the season – the April 10th contest – will be Yankees/Red Sox at Fenway. I realize it’s still January but seeing that actual games will be played on actual dates makes the start of the 2011 campaign seem more real, doesn’t it? Like it’s really happening? It does to me.
Of course, while certain aspects of Yankees-Red Sox will seem like old times (the “Yankee suck” chants, the lusty boos for A-Rod and Tex, the presence of familiar villains like Pedroia and Youkilis), it’ll be interesting to see how newcomers Crawford and Gonzalez play into The Rivalry. And it’ll be weird not to have Joe Morgan and Jon Miller to kick around anymore.
The good news is that spring really is around the corner, despite this photo that Friend of the Blog John (aka ooaooa) sent me of his picturesque, snow-covered backyard. Gotta love his taste in barns.