As always, my husband and I went down to LA for Thanksgiving at our friend Rhonda’s house. And as always, she set a beautiful table. 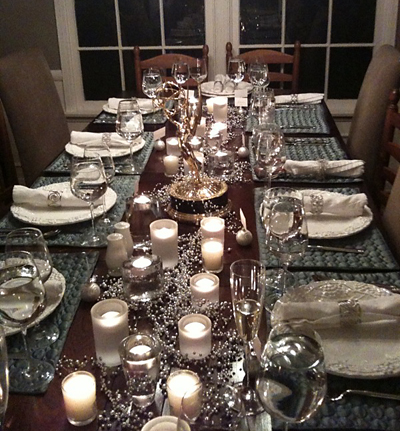 It’s hard to see in the pic I took, but this year her centerpiece was the Daytime Emmy she won for Best Show. (She produces “The Bold and the Beautiful.”) Talk about hardware. I think it weighed more than this. 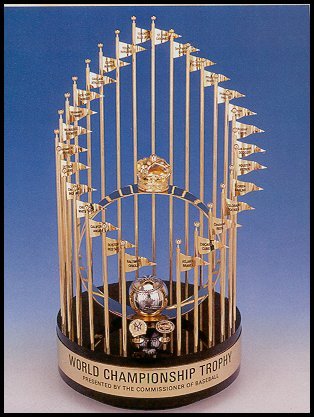 Speaking of the Yankees, no sooner did I sit down at dinner when Mary Ann, my nemesis from last Thanksgiving, started trashing the boys in pinstripes. I had asked her if she wanted to take back what she’d said last year (“The Yankees can’t hit, pitch or run the bases”) in light of our World Series triumph.
“No,” she said. “I still hate the Yankees. They didn’t win the World Series. They bought it.”
OK, I was ready for that. I did my whole speech consisting of all the arguments I’d rehearsed, many of them suggested by readers of this blog. Nothing made a dent.
“Arte Moreno is a much better owner than the Steinbrenners,” she said.
“How many championships have the Angels won?” I asked with a straight face.
“That’s not relevant,” she said. “The Angels are a better team.”
“But the Yankees beat them,” I reminded her.
“If you spend enough money, you can beat anybody,” she replied.
At this point I wanted to leap across Rhonda’s beautiful table and strangle Mary Ann. Instead, respecting my hostess, I asked her if she wanted to take it outside.
“Sure,” she said. “Why not?”
Here’s the result. I’m not proud of what I did, but I had to stick up for my Yankees. 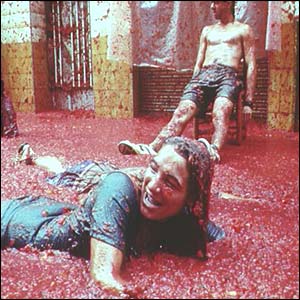 Yes, that’s me lying in a giant puddle of cranberry sauce. Mary Ann’s son Antonio is sitting in the chair joining his mother in a chant of “Yankees suck.” I wish I could show you the video of the confrontation, but I’d had a glass of champagne and it caused me to inadvertently hit the delete button after I recorded it. Luckily, Mary Ann and I made up before Rhonda took the turkey off the table and we were able to finish dinner without further incident. Except for her Yankee bashing, she’s really a very nice person. And the turkey was exceptionally tasty and perfectly carved. 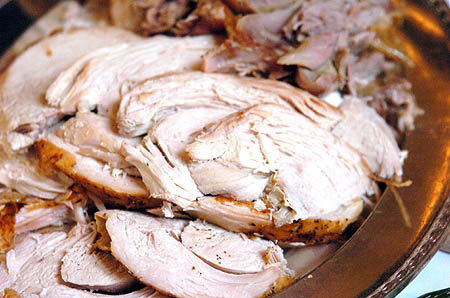 As luck would have it, there was a new guest at the table this year – an actor named Robert who lives in LA but who was born and raised in New York. He turned out to be a Yankee fan, thank God, and while everybody else was cleaning up in the kitchen, we talked about our favorite team. He told one story that had everybody laughing, especially given the recent news about the White House party crashers. 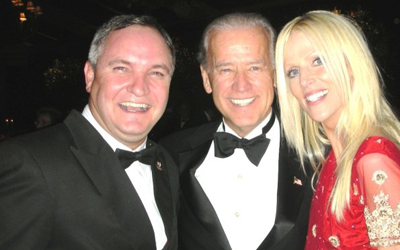 Here’s Robert. I’m very excited about my assignment with him at the 2010 All-Star Game. You’ll understand after watching the vid. I hope everybody had a Happy Thanksgiving – or, as Robert said, a Happy Yanksgiving. 🙂