He threw 98 mph. He didn’t walk a single batter. And he struck out eight en route to the Yankees 9-1 victory over the Mets. He also had an RBI single and scored during the Mets’ error-filled meltdown in the second. I could feel the ground shake as he chugged home. He’s as big as The Fridge, isn’t he?

Anyway, it was a masterful performance, marred only by Sheffield’s blast, and I hope he doesn’t catch the bug that claimed Jeter, the birthday boy, who was scratched from the lineup with a bad cough.

Other than CC, the hero of the night was Brett the Jet, who is insanely fast and could probably win a race with this guy.

Five-for-five with a homer, a triple and a stolen base? How hug-worthy was that?

Damon continued to excel (great dive/slide on that catch of Cora’s pop up in the first).

Cano played good ball in spite of his various ailments. And Pena had a couple of doubles, subbing for Jeter. But how about A-Rod. He’s looked like a different player in the last few games. Maybe it’s the day off he had during the week or the hip that’s finally healing or the fact that Kate Hudson is following him around the country and bringing him luck instead of jinxing him.

All I know is he made several nice plays at third and passed Reggie on the all-time home run list. 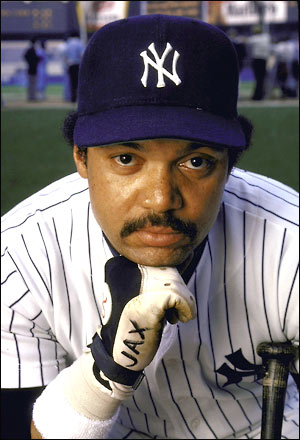 I wonder why the Mets’ defense goes all loosey-goosey when they face the Yanks. That second inning was like a bloopers reel. Maybe it’s because of their lame old theme song. Here’s Bob Costas singing it. Not good at all.
P.S. I’m sad about Nady. I thought he’d have a big year for us. And now he’s done.
Goodbye, X-Man. It was fun while you lasted.