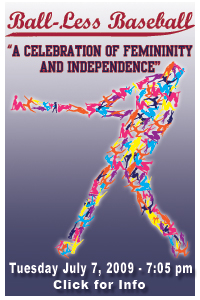 Yes, women will be the stars of the evening as the Renegades welcome only the “better half” to the ballpark.
According to the team’s press release:
“On this evening, all men will be greeted in their own separate zone outside the gates, with only female fans permitted inside until the game is official at the 5th inning mark. All boys, seven and under, will be allowed entry at any time – the Renegades’ homage to Momma’s boys everywhere.”
There’s more.
“Ladies, venture out to Dutchess Stadium on July 7th for this celebration of femininity and independence, as the Hudson Valley Renegades will honor some of the most powerful and successful women working in baseball. Throwing out the ceremonial first pitch will be New York Yankees Vice President and Assistant General Manager, Jean Afterman, one of the most respected and influential executives in Major League Baseball.”

The “Ball-Less Baseball” campaign was designed to create a night out at the ballpark solely for women. According to Tyler Tumminia, the team’s marketing VP: “We have recognized the significant buying power that women have wielded within our parks for several years, and have seen the growth of females within our industry skyrocket along the same timeline. We wanted to both thank them for their support and empower them to continue their rapid ascent within our ranks.”
So glad she-fans are being recognized with this great promotion. My favorite part (not counting that “Confessions of a She-Fan” will be given a shout-out on the video screen) is that women will be able to receive a full spa treatment while watching the game. Can you picture it?