Oh, well. I guess it’s better than sweltering in the heat.
This morning, I headed downtown from my hotel to SoHo, where I spent two very enjoyable hours being interviewed for Barbara Kopple’s ESPN documentary on the Yankees. A two-time Oscar winner, Barbara couldn’t have been more welcoming, and it was a pleasure to meet her. My husband Michael took a photo of me with her.

It was her very capable and enthusiastic associate, David Cassidy, who conducted the interview. He’s a diehard Yankee fan, so there was lots to talk about.

I have no idea if I said anything useful, but I guess I’ll find out after the documentary airs next year.
Then, it was back uptown to the studio where they tape YES’s “Yankees Magazine.” I had a lot of fun answering questions posed by George Pisanti, who’s been producing the show for several years. I’ll post my air date as soon as I have it.

Later, it was off to dinner with this guy…. 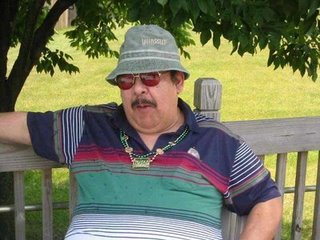 …Alphonso, the infamous pessimist who makes special appearances on the Yankees blog, “It Is High.”
I had told him I wanted to watch the Yankees-Nats game, so he thoughtfully chose a restaurant with a TV tuned to the game – only to tell me over and over again why the Yankees would lose.
“No, they won’t,” I said, as the Yanks went up 2-0.
“Yes, they will,” he said, as the Nats went up 3-2.
OMG, I thought. Anderson Hernandez, the guy who never hits homers, according to my scouting report, smacked a three-run shot off CC!
“See how they can’t score any runs off this nobody pitcher named Martis?” said Alphonso, as he polished off his second Manhattan. “And look at A-Rod. Another terrible game for him. They’re a third place team, I’m telling you.”
“They are not,” I said, giving him a nudge in the ribs as Tex tied the score with a double.
“They’ll find a way to lose, and it’ll be an embarrassment,” he said, popping an oyster into his mouth and risking some dreaded food poisoning.
“Oh yeah?” I said just as Cano smacked a double off Ron Villone in the seventh, driving in the go-ahead run.
“But Joe’s bringing Bruney in for the eighth,” he said. “He’s not ready for this. It’s his first day off the DL.”
Bruney was more than ready. So was Mo. And then there were the dazzling defensive plays by Pena and Cano, who went 4-for-4. Except for Jeter coming out with ankle stiffness, it was a nice, neat 5-3 victory for the Yankees.
“But they should have beaten the Nationals 50-0,” said Alphonso.
“A win is a win!” I maintained, my frustration boiling over.
I hate to admit it, but I couldn’t contain myself a minute longer and threw my piece of salmon fillet in his face. He retaliated by dumping his entire serving of cherrystone clams on my head. What should have been a friendly dinner between bloggers disintegrated into pure chaos at the restaurant, which, by the way is called Docks and serves excellent seafood.
See you at Stan’s Bar on Wednesday afternoon!