No, I’m not talking about the Yankees, although tonight’s 4-3 extra-innings loss to the Rays was a bitter one to swallow.

With the wildfire raging (more on that in a sec), my electricity was out this afternoon but came back on just in time for the first pitch.
AJ looked sharp, striking out eight and keeping the Rays’ hitters off balance. Yes, he gave up three runs over six innings, but he more than allowed the Yankees to stay in it and I really enjoyed watching him work. He’s got that great snarl, not to mention filthy stuff, and I wouldn’t mind if he went out there every night. (I know. His arm would fall off. I’m just saying.)

The Yankees’ offense? It was practically non-existent yet again. Swisher didn’t help, getting himself tossed in the seventh with the Yanks down 3-0. David Cone repeatedly said the umpire had a “quick hook,” but Swisher’s job was to stay in the game, not go off by himself to sulk.

The bats finally came alive in the eighth against a tiring Sonnanstine and a shaky Howell. When Tex stepped in with bases loaded, I did my yelling-at-the-TV thing: “THIS IS YOUR BIG CHANCE! BE A HERO!” And suddenly he was the hero, tying the score with a double to left. I went completely nuts and started dancing around the house and talking to myself.
Then the rain. I sure wish New York would send some of it to California.
When Mo struck out Upton, Crawford and Longoria in the ninth, I danced around again. He hadn’t been on the mound in nearly a week and yet he was brilliant.
I was sure the Yanks would win it in the bottom of the inning (Ramiro Pena was safe at first – such a bad call), but nothing.
Onto the tenth. Why didn’t Joe bring Mo back out? It wasn’t as if he’d been taxed. It wasn’t as if he’d labored. It wasn’t as if there was ANY reason to call on ANYONE ELSE, and yet there was Coke pitching to Carlos Pena and serving up a fat one. Granted, Coke has been effective lately, but still. Mo is Mo. Why would you ever use another reliever when he’s available?
So much for the lame bottom of the tenth after Damon doubled. What a waste.
After the game, it was reality time. I switched to our local TV news and watched coverage of the fire, which had roared out of control and forced the Governator to declare a state of emergency. Businesses were closed. Over 8,000 people have been evacuated. And homes are going down. Santa Barbara is in bad shape. 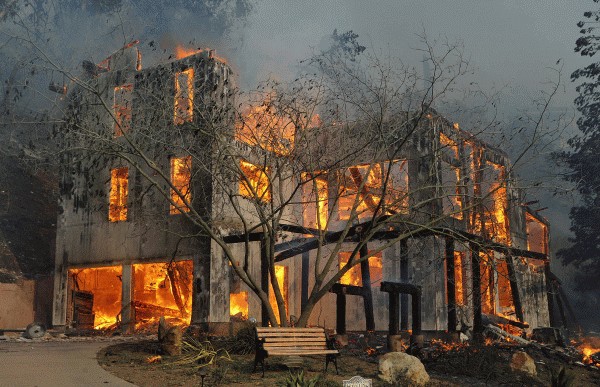 Planes have been dumping water and fire retardant on the affected areas all day, but the winds aren’t cooperating.

My house isn’t directly affected right now, as I live a few canyons away from the one above. But I took the following photos this afternoon from my backyard deck, before the game. As you can see, the fire was definitely looming. 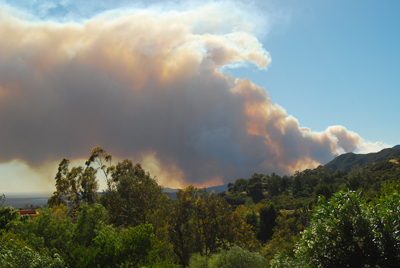 It’s supposed to be hot again tomorrow (in the mid-90s/low 100s – bizarre for the season) and windy, so who knows what’s next. They predict the fire will head closer to me, toward the area that burned in November, which is actually good news; there’s nothing left to burn there. Another possibility is that it will turn toward the city of Santa Barbara itself. I don’t even want to contemplate that.
Having baseball to look forward to again tomorrow night, win or lose, is so small thing.